SPE Izumrud ltd. was founded in 1998. At first it was a small private company, working in a room of 10 m2 with only three staff. The company busied itself solely with selling water purifiers, assembled in Moscow by the enterprise SPA Ecran. Izumrud’s CEO, Vladimir Vinogradov, talks about how the company began. ‘After the default in Russia in 1998 it was useless to go on rescuing the old business. When I heard about ECAS technologies, I understood the outlook of it.’

By the year 2001 the company had significantly grown up. It became clear that selling purifiers had few prospects. And so, the company worked out a new strategy. This strategy was aimed now at preforming scientific research. Izumrud got the rights from SPA Ecran to be its representative, to improve their purifiers and to sell them under Izumrud’s own brand. The pattern of ownership changed: the private company changed into Scientific and Production Enterprise Izumrud ltd. The company hired qualified chemists and engineers, including hardware engineers. The enterprise acquired an assembly plant and a lab. As of this year Izumrud ltd. co-operates with huge research institutions and labs .
In 2004 the company launched an internet site. It soon became available in foreign languages and made the company competitive on the global market. Combined with the company’s rapid growth, this situation puzzled the Moscow manufacturers of the purifiers. Sensing a new and dange 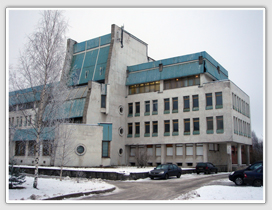 rous competitor, SPA Ecran demanded that the English version of the site be deleted within 12 hours. The head of SPE Izumrud offered many possible solutionsand compromises to Ecran, but they were declined. Hence, their partnership was broken.

However, the launch of the site significantly improved sales efficiency. This allowed investing in research and development. Finally, this resulted in the invention of the unique electrochemical reactor, which was soon patented. The devices produced with the new reactor won the approval of our clients. Our buyers note the high quality of water purification and the long operating life of our new devices.

In 2005 Izumrud ltd. participated in the biggest in Russia agricultural fair ‘The Golden Autumn’. Our company was awarded a silver medal and a diploma, signed by the Moscow government. A full list of our awards can be found here.

Izumrud ltd. today is a young, energetic team of specialists and like-minded people, aiming at success and reacting to the consumer demands and the requirements of the global market. The company performs scientific research, possesses its own patents, and implements the newest construction technologies into its products.

In 2007-2008 the company participated in several innovation projects, and was awarded by the Saint-Petersburg government. In August 2008, Izumrud ltd. was presented with ‘The best small business entrepreneur in Saint-Petersburg’ award.