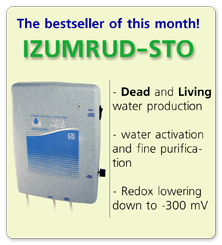 The devices to produce dead and living water are available by clicking on this link.

Before the 19th century people did not know that the water is a chemical compound. It was considered to be an ordinary chemical element. It hadn’t been thought of that any modifications of water could exist. In 1932 the world was shaken: American scientists discovered heavy water, which is composed of deuterium (D2) in the place of hydrogen (H2). The scientific community then proved that this heavy water, though always present in human body, increases the amount of poisons in the body. That’s why it is called ‘Dead water’. Today, scientists know more than 150 modifications of water and more than 200 modifications of ice. The existence of Dead and Living water was finally proven by microscopic research of water immunity. It was found that a special kind of water accumulates around the ‘bad’ cells of the body (that is, cells affected by cancer, different microbes and viruses). This water stirs up the ‘death gene’ in the ‘bad’ cells and destroys them. Around the ‘good’ (healthy) cells, water accumulates which stirs up the ‘life gene’. This gene contributes to the proper functioning of these cells. If, however, the mechanism is broken, and there is not enough Dead water around the diseased cells, illness sets in.

Dead water is characterized by an acidic environment and has a powerful disinfecting and sterilizing effect. That’s why it can be used at home – to disinfect potable water, to treat rooms, to soak and wash the clothes, to treat the dishes, to preserve fruits, vegetables and root crops, and to treat humans and animals. Dead water has large capacity for cleaning polluted waters, pipes, vessels for water transportation, swimming pools and water sources.

Swimming pool water after aquaeca treatment turns blue and loses any smell or irritating effect on skin and mucous membrane. Using the testimony of people who have swam in such swimming pools, the state of their cutaneous covering improves, and fungus diseases are cured
In medicine aquaeca is given the green light to disinfect and sterilize scalpels, syringes, equipment, test tubes, catheters, prophesizes, gloves, pipes. It can be easily applied to wash surgeon’s hands, with no danger of irritation. One can use it to cure gastric and intestinal ulcers, trophic ulcers and septic wounds, skin diseases. It is widely applied in veterinary medicine to treat dermatitis, ulcers and wounds of animals.

The application of Living water is widely varied. Firstly, it is used to treat wounds and ulcers, as well as many diseases, such as: respiratory, cardiovascular, locomotive, dermatological, urological, and gynecological, to name a few. Secondly, Catholyte can be used at home to improve plants’ growth, as well as to wash pets before exhibitions. If you treat fruits and vegetables with catholyte, their expiration date is extended for to 2-3 months. Apples can keep their freshness for more than half a year. Attention: dead and living water have hundreds of modifications, depending on minerals concentration. Before using it, please, address yourself to the Scientific Center of Izumrud ltd.